Hi guys! Hope y’all are having a lovely day. Today it’s Friday, so it’s time for some flash fiction. Today I’m doing a Dixit-inspired image prompt piece. It’s been a long while since I did one of those, don’t you think? For those of you who don’t know, Dixit is possibly my favorite board game and features amazing, fantastical illustrations that I sometimes use for flash fiction prompts. Here is today’s card, and piece: 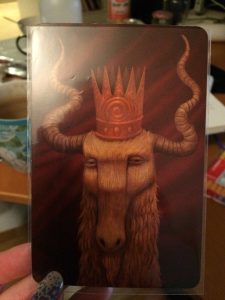 The Horned King was very tired. He had seen so many battles, led so many men into victory and into death. His sword had been forged and re-forged, always in the same shape and with the same deadliness. He had led skirmishes of a dozen combatants, and armies of thousands. He had marched on villages, on towns, on fortified cities, and been likewise marched on by hordes of foreign armies. Over time, he had seized marching himself. The rumor of his prowess traveled so far and wide that it seemed as soon as one army was beaten down outside his castle, another came to take its place. It didn’t matter. They were all defeated. Once, they had been besieged for over ten years and just when all seemed lost, just when the enemy was about to storm the castle, he had strode out, in all his glory and with all his men, and beaten them down. He had seen so many battles and he knew there was always a moment when all seemed lost, when morale wavered and fear grew, when even the bravest of men might despair. He had heard every cry of pain, every shout of fear, suspicion and rage time and time again. That was why, when the call rang out over the castle that the enemy had breached the gate, he didn’t pay it any heed. Either it was some young lad mistaking a comrade for an enemy, or else some lone lucky bastard with a grappling hook had scaled the walls, and would soon be cut down by his men. That was what always happened, and that’s why he didn’t react to the cries, didn’t look up from his dinner plate, not until the arrow was already whizzing through the air.

What do you guys thing? Little, improvised piece, but I sort of like it. The first line just popped into my head when I saw this image, after rummaging through my Dixit cards for a bit trying to find one that spoke to me.

One Reply to “Flash Fiction Friday – The Final Battle”