I’m on vacation! I still have some work stuff I need to finish this weekend, but I’m officially out of the office until January 11th which feels awesome! Today I’ve had a slow day, bit hungover after an office X-mas party that turned into bar hopping. Had a great time!

Tonight I’ve reached into my trusty Dixit deck for some writing inspiration. As a reminder, Dixit is an awesome board game featuring some fantastic illustrations and you should all try it! Here is today’s card: 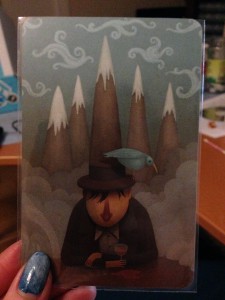 On to the flash fiction:

Resignation
The bird was back again. For what felt like the millionth time, it landed on his hat and let out its loud, shrill call. He could chase it away, but there was no point. It would just come back. It always did. No matter how much he shouted, or waves his arms about, or shook his head, or hung out around cats, it always came back. He was sure of that now. He’d done everything he could, tried every possible way to make it go away, and it had all failed. He had changed his clothes, changed his hat. He’d changed his cologne and his shampoo. He’d stopped spending time in all his usual spots and only gone to new places, but the bird followed. Even past the five mountains, through the thick fog, the bird had followed. He’d never be rid of it. There was only one thing to do.

He poured himself another drink.

And with that, I am off to sleep.