Last week I was crazy tired. I’m not sure why, maybe I’m still just adjusting to being back at work, but blogging in the evenings was just not a thing that was happening at all! So since I missed Worldbuilding Wednesday and Flash Fiction Friday, I’m doing a special post today combining them. Yay!

This week I finished the paper version of my map, inked it and scanned it. I’ve been poking at it a bit digitally and will continue to do so over the next while. I need to clean up the outlines, do some mockups of plate tectonics, ocean streams and the like, add mountain ranges and other larger details and then color it. But for now, I’m just happy to have it digital!

I decided to do a special writing prompt round in honor of my map! What I did was, I picked 5 prompts from Shortstoryideas.co.uk’s random word generator (re-rolling quite a few times because there’s a lot of modern words in there) and then used my dice to pick 5 locations on my map for these prompts (also re-rolling quite a bit when I ended up in the middle of the ocean). Then I wrote some snippets based on the prompts and locations. Some of them are just random, some hint at worldbuilding ideas I have for some cultures, some might even contain characters that will feature in my books, who knows? Anyway, here is the map (with the prompt sites in purple): 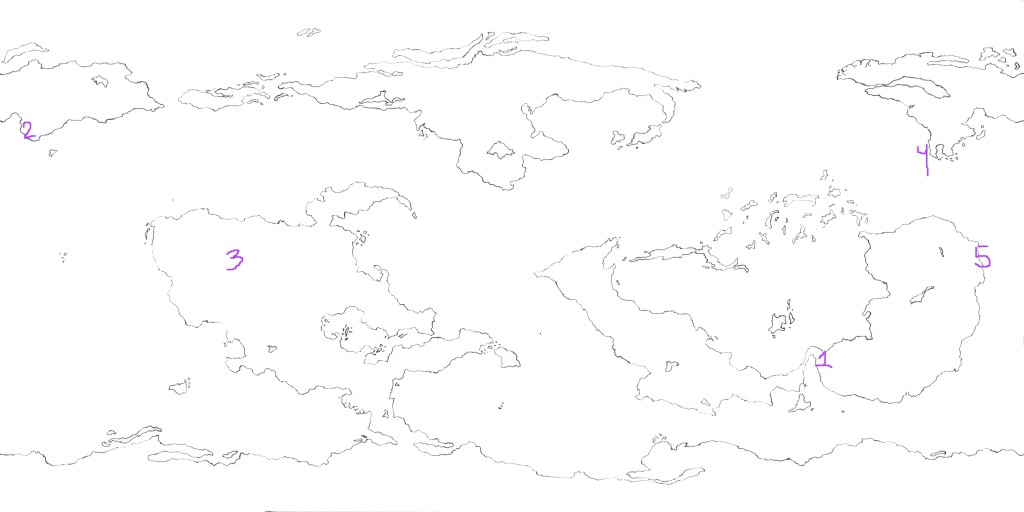 And here are the prompts! The titles aren’t actual titles, just the words I rolled on the prompt generator.

The boy’s heart pounded as he opened the door. His gaze dropped to the ground outside, and when he discovered there was nothing there his eyes welled up. Just to be sure, he stepped outside and looked around. Nothing. Not a single blossom, let alone an orchid band. Through misty eyes he saw the boy in the next house over come out onto the steps and brighten at the gift left there by some girl, or girls, in the early hours of the morning. The boy swallowed the tears in his throat and balled up his fists. It wasn’t fair! Like every year before, he’d be only boy at the dance without an orchid band, and he’d done nothing to deserve it. I’m just as good as you, he thought, shooting his neighbor a fierce glare that went unnoticed. One day you’ll all see that.

Pretty simple, inspired by reading about Raksha Bandhan the other day.

Lehla swept the hard dirt floor and laid her quilt out over the bed. The pattern was circular, the colors soft, and it seemed to brighten the whole of the large bedroom. It was strange to think of her mother’s quilt, the deep red with the square pattern, folded up in the trunk on the back of the cart that now rolled across the street towards her oldest brother’s house. She had worried briefly that her parents would make trouble, that they would find some reason to linger another day or two, but they had left without any fuss after the morning meal.
She gathered flowers outside the house, the bright yellow ones with the long stems, and looked towards the horizon to see if the fishing boat was returning yet. How surprised Jahn would be when they returned, how pleased to find that it was now her house, that they could now marry.

This prompt caused me to invent an inheritance law for a region, which I may or may not keep.

Safina sighed and tried to conceal her boredom as she laid on the blanket, picking at a plate of fruit. Let him paint you, her mother had said, he’s a very sweet boy, and very talented. She was right on both counts, of course, but he was also dreadfully boring. It was dull enough to sit there on the blanket in the gardens behind the palace while he dabbed paint onto his canvas and peered at her endlessly. That alone might’ve been bearable, if they could’ve at least had some interesting conversation. Yet every time his mouth opened it was to praise her beauty or his own skill as an artist. After a while, she stopped even trying to engage him and simply made agreeing noises when he spoke. Her gaze drifted instead to Adala, her bodyguard of two months now and whose beauty impressed her. Her suitor was beautiful, too, that was true, but it was such a conscious beauty, so many choices poured into it, and his awareness of it seeped through his every pore. Adala’s beauty was simpler: a fine face, strong, full lips, and dark hair kept short. She was starting to develop a taste for simple, and a distaste for being painted.

These characters came to me in a dream a while back. Well, not the painter. He’s just there for the prompt.

The girl’s fingers trembled as she dug the hole and dropped the bracelet inside. The silver, the exquisite gemstones sparkled in the sun that leaked from between the trees. It was the most beautiful thing she’d ever seen, and that’s why she’d had to steal it. It wasn’t right, it just wasn’t right how the lord’s daughter had treated it like some cheap wooden trinket that any man with a knife could’ve created.
The hole was filled with dirt, then she moved a rock over it to conceal the disturbed ground. She patted the rock before she got up. It was better off admired but buried than on that ungrateful girl’s dresser.

Don’t know where this came from.

The drumming of the children’s feet flew past the window of the bakery when the ship was spotted on the horizon. The old baker looked out of the window to see what the fuss was about. When it was clear from the commotion that it was a trading ship approaching and not some dull old fishing boat, he wiped his hands on the apron and trotted down to the harbor where by now most of the town was waiting. The ship was still too far to tell it’s origin, and people speculated wildly about where it might be from.
“Spice merchant…” he mumbled, touching the talisman on his wrist. “Please let it be spice merchants.”

Pretty straight-forward, like the one above. Sorry this post got a bit long, I just really wanted to take my map for a spin, so to say. Hope you’ve enjoyed at least one prompt!

And now it’s time for a bath, I think.