Yesterday, I won Camp NaNo! My goal was only 15k, but even so I’m happy about it. I’ve finished one short, nearly finished a second and have maybe 25% of a third. If I can keep up a decent pace (having already won is surprisingly demotivating), I am hoping I’ll hit 20k and have two finished and one half-finished shorts by the month’s end. 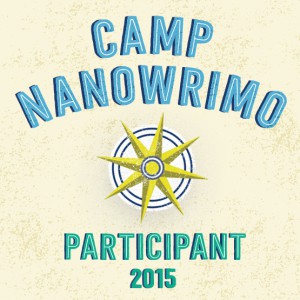 Other than Camp, I’ve been working on my world building, which has been going well. As some of you may have seen I published my first ever Worldbuilding Wednesday post and, as usual, a Flash Fiction Friday post, too.

NaNo ends on Saturday, so from Sunday onward I will be working on polishing up the shorts I wrote. I don’t think I’ve mentioned it before, but the shorts I’m working on right now are erotic and well be published under a pen name. For that reason, I won’t be talking too much about them here once they’re out, but I will let interested parties know what name they’re published under. Apart from the shorts, I’ll give myself a break of a week or so, and then move on the next project I want to take from a draft to a finished product. I’ll let you know what the project is later on, as I’m only about 95% sure I’ve picked which one to work on.

Now if you’ll excuse me, I have a very silly show called Warehouse 13 to watch. Good night, all!