As I’ve mentioned in my Monday updates lately, I’m currently working on a big worldbuilding project. Since I thought it might be fun to share my work, and since I have an undying and probably unhealthy love for alliteration, I am hereby introducing Worldbuilding Wednesday, during which I’ll post about my progress, the problems I run into and how I solve them, the tools and resources I use and anything else that ties into it. I’ll probably not post every week, just when I’ve something new to add, but I’ll try to post often.

So, what is worldbuilding? Simply put, it’s creating the world that your stories takes place in. This can include anything from going “Vampires function like this and that, and London’s full of them” to years of map-making, conlanging, culture building and the like. Personally, I think a certain element of worldbuilding is part of any fiction writing, but it’s perhaps more obvious when it comes to speculative fiction, which happens to be most of what I write. A lot of the time, I do my worldbuilding as I write, inventing things as I go and to whatever extent I need them, then taking whatever notes I might need for later. But for this world, which I’ve named Erziyye, I’ve decided to take a different approach and make my worldbuilding more conscious, planned and detailed.

Most of my fictional worlds have these things in common: they are alternative versions of Earth, their scope is somewhat limited (in terms of geography as well as genre/theme) and they either have only a few stories set in them or a higher several stories most of which are about the same characters. For these worlds, all the background stuff (geography, history, biology, cultures etc) are already there, and I only need to invent the things that pertain directly to the story itself and to whatever it is that makes the world different from the real Earth (for example, the addition of monsters or magic, or like in the Orryn novellas, a dystopian state).

Erziyye, on the other hand, is a different planet altogether. It will be host to many stories, which vary in terms of genres and themes and take place in different times and places. It’s important to me that, in spite of that, the world will feel real and tangible, that it will draw people in and be unique without feeling contrived. To achieve that, I feel that it’s important to really put time and effort into my worldbuilding, since I don’t have all the background stuff that comes with Earth-based worlds to help me create that realism.

Erziyye is a fantasy world. I originally concieved of it as a medieval fantasy world, but while most stories will probably take place in a time whose technology levels resemble our middle ages, I’ve begun to toy with the idea of spreading the stories out a bit more over time. We’ll see how that goes. I’ve set up a wiki for Erziyye. It’s currently empty but I’ll be adding to it gradually.

Now, let me tell you
What I’ve learned in the first few weeks of worldbulding

Those are the two biggest lessons I’ve learned so far. At the end of last week, I finally managed to convince myself to stop preparing and start building, so I’ve been working on my world map since then. 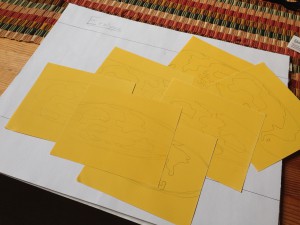 I’ve been sketching continents on small peices of notepaper to play with different shapes and compositions. This morning I started working on a larger map. I suspect it’ll be a slow process with lots of trial and error. Once it’s done, it’ll be scanned into my computer. Having a digital version will make it easier to add detail as well as to make different derivations of it, like maps zooming in on limited areas. I do wish I had larger paper though but I’ll make do with this.

I’m afraid that’s all I have to show you tonight! Check back next week to see how my map’s coming along and what else I’ve been up to!

3 Replies to “Welcome to Worldbuilding Wednesday”