That’s right, guys! On Friday the 20th, I won NaNo! Well, I won the 50k bit anyway, not the “finish your draft” bit, got a bit of a ways to go with that. That is a super-yay in my view, because this is (as far as I can recall) the only time that I’ve won NaNo before the last day of the month. I usually end up with a 50-53k total, something like that. So hitting 50k 10 days early? Pretty mind-blowing! I’m catiously hoping for something like 75k as my final wordcount by the end of the month (though I think the final draft will be a bit longer than that).

And guess what else? I have purple hair: 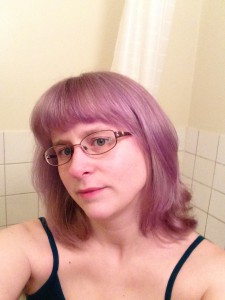 Isn’t it awesome? My boyfriend bought me two bottles of this conditioner with semi-permanent dye in it for my birthday. My hair was a bit too dark for the vibrant purple I was hoping for, but I’m quite fond of the results anyway. My boyfriend calls it “fey purple” because in some lights it’s very obviously purple and in some lights it just looks like this odd, silvery brown. My uncle called it “silver plum” and I think that’s my favorite description so far. We’ll see how long I keep it up for, but so far I’m enjoying it!

So what did I do this week:

So what about this coming week? Well, the next two days are day job days, but then I have the rest of NaNo, five whole days, off! Yay! So I will be:

Now if you’ll excuse me, I need about 500 words more before I can hit the hay. Night, ya’ll!