Guys! I won NaNo! Feast your eyes on these sweet final stats: 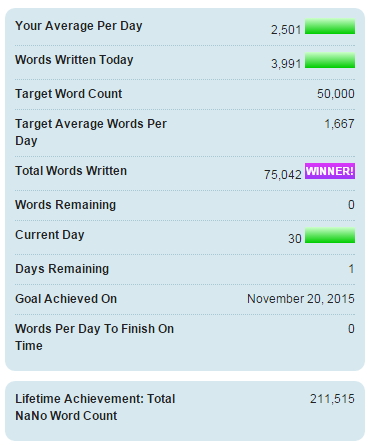 75k, can you believe it? I almost can’t. It makes sense because I hit 50k on the 20th, 2/3 of the way through. But at the same time… I’ve never totaled more than, say, 52-53k during NaNo before so basically I feel like Superwoman. As for the draft, it’s not totally done. I estimate another 10-15k will be needed, which I might try to add during the month of December in my spare time, but then again I suck at estimating so we’ll see.

So what now? Well, I suspect this coming week will contain a lot of vegging. Other than that, I will mostly be focusing on planning for the rest of December, and the spring. I need to re-prioritize my commitments a bit for the coming 6 months or so, which includes down-grading the writing for a while to being something I do in my free time (evenings, weekends) but not during my non-day job work week. Basically my non-day job job for the next while will be studying, since I’m aiming for a BA in June and need to pick up the pace. That being said, I’m still going to try to write as much as I can, and I have an exciting project coming up that I hope to announce to you guys by New Year’s. But for a while, I need to allocate more hours/week to my studies, and see what’s left after that. This week will mostly be spent planing how to structure my time and my studies, and planing the aforementioned exciting project. I will, however, be getting back to my Flash Fiction Friday on Friday. So yay for that, and double yay for NaNo!