Wow, for once I’m aware of what day of the week it is and at my computer and not too sleepy to blog. I feel like I’ve been missing my scheduled posts a lot lately, especially on Wednesdays but also on Fridays. But maybe I haven’t. To be honest, it feels like this week has been three weeks long so maybe that’s why I feel like I’ve missed things.

Without further ado, here is my (fundamentally disturbing) Dixit card of the week: 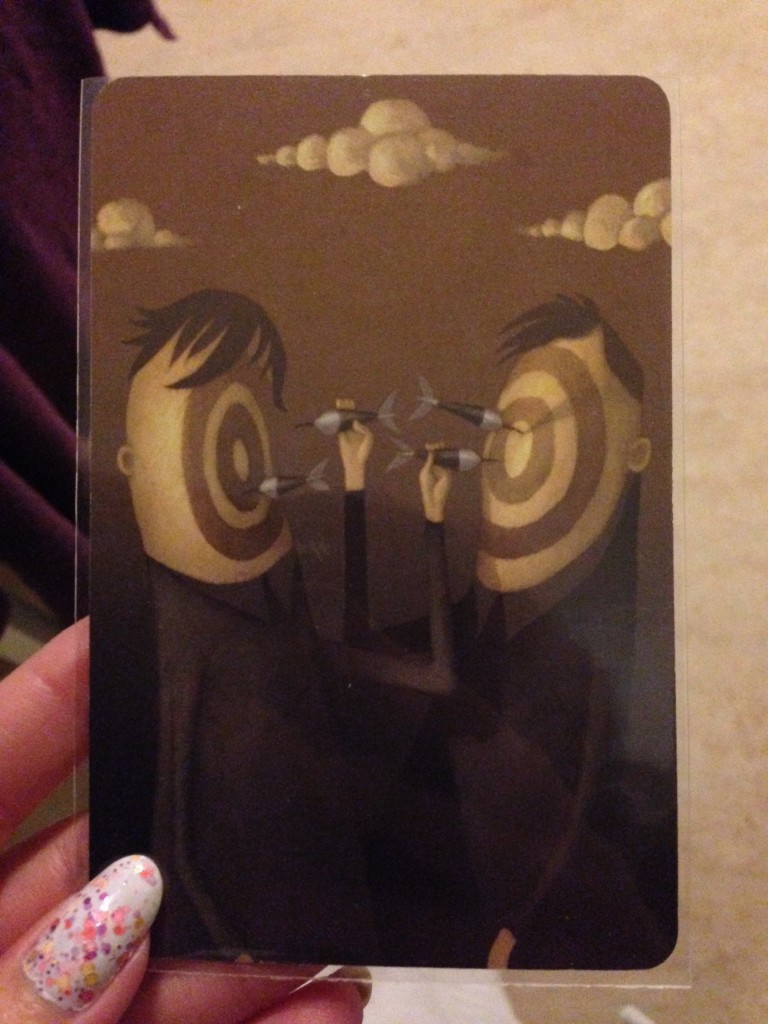 Creepy, no? As usual all credit go to Dixit and its talented illustrators! Today I took a bit of a less literal approach than normal. Probably a good thing… Here we go:

The Breakup
“So, what happened?”

She waits for an answer to form.

“It was the fights,” she says, finally. “I just… we just couldn’t deal anymore.”

“You never used to fight?”

“No, we fought all the time… over dumb shit. Whose turn was it to wash the dishes and which idiot put the red socks in with the sheets, you know? And that was okay… I was okay with being an idiot for ruining the sheets. So was he…”

“I don’t know we just… one day, there we were and, we weren’t calling each other idiots over sheets anymore. We were there and we were just… going for each other’s throats. I don’t know when we got like that…”

Her eyes widen a bit, confusion and concern.

“Not literaly. Just… saying the most hurtful things we could. Anything, true, false both… anything, just to win the fight.”

They both sip their coffee.

“One time, I said something… and when his face fell, I smiled. All that hurt and I smiled, because I’d won…” she brushed her fights lightly along her lower eyelid, removing moisture. “That’s when I knew it had to end.”

Bit somber, I guess. It’s fun to write mostly in dialogue, though.