So, the chapter from One Year to a Writing Life that I did in September was called The Alchemy of Writing. It was a bit of a weird one. It was about finding an idea and turning it from a little nugget into a story through a series of steps. It started, like the earlier chapter on dreams and writing, with writing down a dream and circling an imagine from it. Here was mine:

A desert market. Some kind of princess, Safina, getting off of a horse or camel with her companion, a man with a beard dressed in blue. He wears a turban. She had red hair. There are guards. They meet her mother, in a blue cloak, and little sister by a stall and talk about some plot that’s going on. Someone’s been kidnapped. Later, Safina sits in a carrying stool, behind a pink and white curtain. The man, Adala, sits outside. He reaches his hand in to comfort her.

I only wrote down the rough details of the dream. The image I circled was the pink and white curtain. Next, the book asked to write down a memory from our childhood and circle an image from that:

The night air is cool but not cold. It’s not dark yet, it doesn’t get properly dark this time of year, not for me to see anyway. Dad and Rasmus are off fishing, only mom and I are in the cabin. There is a noise outside.

The young fox sits by the veranda. It sits calmly, tilts its head to one side in a way that reminds me of a dog. Content, friendly, curious. I step out onto the veranda, expecting it to run away but it stays. Curious, tempted by the notion of being some forest child who makes friends with the animals, I inch closer. Closer, and closer still. I am at the edge of the veranda, and I reach out my hand. I am barely a foot away when it finally moves, starts and darts off into the bushes.

I circled the image of the fox with its head tilted. Next we were asked to describe an image in our surroundings (either our immediate surroundings or our home). I chose, literally, an image from my home, a charcoal sketch I was given as a present years ago:

The drawing is of a woman that died. Or rather, the drawing is of a girl, drawn by a woman that died. I did not know her well, but I liked her and she gave me the drawing as a reward for my admiration of it. I think she knew already then that she was dying. It is in charcoal, thick, soft, confident lines. The girl reminds me of a bird: ruffled hair like feathers, her long neck turned to look over her shoulder, look out of the drawing at me every time I step into the living room. There is a stain on the pas-part-tout, a peice of bluetac that kept some newspaper over the drawing to get it home safely. I couldn’t get the stain out.

Next the task was to chose one of these three images and describe it. I chose the one from the dream, the pink curtain:

The curtain billows in the breeze. I cannot see behind it, it’s all around me, but the sun shines through the fabric. The white and pink bleed into one another, abstract floral patterns that shift softly. Wooden pillars hold the curtain up, keeps it around me, keeps it from blowing away in the wind. If I looked up I’m not sure if I would see the sky or a roof, but I don’t look up.

The next exercise was called “drawing a meander”. From what I gather, a meander is a sort of cross between an association map and a non-straight timeline for the story. I didn’t really get it, to be honest. Here is mine: 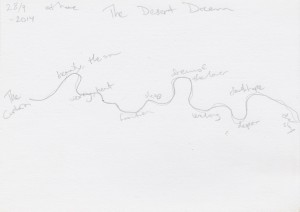 It was an odd exercise, though it did lead me to the final shape of my mini story. The next exercises was one of those “dialogue with your image” ones. It went better than the last time but still felt sort of useless:

What do you want to tell me?

I want to tell you about the sun, about how hot it is, about the scorched sands.

Why the sands? The sun is everywhere.

Where I am, there is no growth. Only the sun, the sands and the pink curtain billowing in the wind.

Why not pink? It is a beautiful color, like a garden of flowers. When the curtain moves in the wind it’s as if they grow and bloom.

Curtain flowers, flowers that your eye creates to please your mind, do not live on water. They live on hope.

I’m not sure if it’s me or the story who’s being pretentious, but someone is. This particular brand of exercise just doesn’t do it for me. The final exercise was to “give your image a written expression”. I took that to mean a mini story:

The curtain surrounds her on four sides, pillows beneath. Above there is only blue sky, and the glowing sun. She shields her eyes with her hand and gazes upward. There are no clouds, only the incredible brightness against the blue background. Her heart trembled with admiration at first, then with concern as the heat grew more and more oppressive and the sun kept gazing down on her unrelentingly. She grew faint, and for a moment she slept, curled up on the pillows. In her dreams they came to her, him and the well in the back garden. They came to her and cooled her brow, quenched her thirst. When she had finished drinking she woke up, and she was overcome by a feeling of grief. She cried against the pillows, but she’d no tears for fear of giving up what little water she had left inside her. As she laid on her back, awaiting death, a cloud drifted overhead. She sat, peering upward, waiting for rain. It never came.

I… don’t know, dudes. I like the dream I had and in fact, I had a book idea from it. But the chapter itself seemed a little… meandering, and a little too… mystical, for my tastes. All this talk of alchemy and turning things into gold. To me writing isn’t magic, it’s a craft. Anyway, the next chapter is on Mosaics and Memoir and seems really interesting.