So, the fifth chapter in One Year to a Writing Life is about dreams and writing. That was a bit of a change of pace from the previous chapters, and since I’ve been in the habit of writing down my dreams (provided they are interesting and/or I can remember them coherently enough) I was curious about what the exercises would be like. The chapter in general spoke mostly about how one can use one’s dreams for inspiration and to tap into one’s deeper creativity. The chapter consisted of five exercises of mixed types, sort of like in chapter one of the book. Although I really enjoy those sorts of exercises in general, I’ll admit I struggled with this one. Firstly, I wanted to use a “fresh” dream and not one I’d written down a long while back. This lead to two things: I ended up waiting about half the month before I had a vivid dream I remembered, and once I did have one it wasn’t all that inspirational. Here’s what a wrote down in my dream journal in the morning (writing down the dream was exercise 1):

April 20th, 2014, at home   Was at a dinner party at Emilia’s. Some friends of hers were there, and Sari and Panda. The flat was very posh. Emilia left with a guy I was trying to talk to. Sari and Panda had to get back to the baby, but I got stuck talking to some girls who were going to bed in folding beds, so they left without me. I ran after, carrying a laptop and iPad in my arms, but I kept losing sight of them. Ended up in a mall/airport with weird staircases and escalators everywhere and arrows/signs that didn’t make sense. Tried to find the parking lot by following the signs but couldn’t find it.

Not the most exciting dream, right? Most of it was the “running around, trying to find something/someone”-type of dream that I often have. The only thing that stuck out in my mind once I was up and going about my day was the image of the guy I was trying to talk to, so the rest of the exercises sort of centered around him. Exercise 2 was to focus on an image from the dream and describe it. It turned out like this:

The apartment was decorated in a modern style, everything sleek and stylish. The lines were clean, the wood was dark. The table was narrow and long, housing three chairs on each side but none on the ends. There was nothing on it but the elbows, hands and wine glasses of the guests. The hostess had left, they weren’t sure where to. It didn’t matter much; they were having a nice time. The conversation was murmured, relaxed and mostly unpretentious. A blond girl tugged absently on her earlobe as she spoke to a boy with long, brown hair. She’d forgotten to wear earrings. That didn’t matter much either; the boy had a nice smile and deep eyes and seemed genuinely interested. Much later she’d realize that he reminded her of a character she’d written. The brown eyes, the mischievous smile, the white shirt, the way he carried himself. He should’ve blended in well with the decor, but something in his manner, the way his hair was slightly mussed up, made him stand out. She wished she didn’t have to go soon.

Exercise 3 was to draw another mandala, like in chapter 1. I don’t like this one as much as that first one, though: 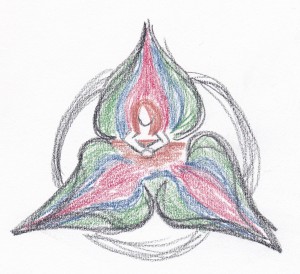 A bit uninspired, if you ask me. The fourth exercise was probably the oddest one I’ve come across in the book so far: to write a dialogue between myself and the image in the two exercises above… To ask it questions and figure out what it wants me to do with it, basically. Well, I tried and it just did not work. I felt silly, and produced absolutely nothing of value. Just really not my thing, I guess. I’m not even going to post it here. Exercise 5 was to take said image and turn it into a short scene. Here it is:

The Boy She was unhappy that the boy had left so early. They had only just begun talking when a girl, who insisted she was not in fact his girlfriend, had headed towards the door and expected him to follow, which he had. Now she was left alone at the table with no one to talk to, and she was annoyed. She wasn’t sure why she had picked the boy out of the crowd of strangers, or why it bothered her that he’d slipped away. He was cute, she supposed, even if he looked much too young for her normal preferences. But he’d had kind eyes and he’d seemed interested in her, and some evenings that was enough to get through one of those social events that you didn’t really want to go to in the first place. She sighed and went to refill her glass from the bag-in-box on the side table. Red wine, because it was that sort of night. Tugging on her earlobe she scanned the room. People were standing, or sitting, in small groups. On the balcony, in the kitchen, on the bed which was visible through the open door, on the living room furniture, on the rug by the fireplace, everywhere. Her gaze was caught by a girl leaning on the arm of a recliner. She was near a group of people but seemed uninterested in the conversation. Smiling, she took a sip of wine and approached.

All in all, this wasn’t exactly my best month. Next chapter is about Dialogue. Half of June has already passed and I haven’t started on the exercises yet, but since I’ve got a bit of time off work right now I’m not too worried about that. I really like the look of the exercises in this chapter so it should be fun!

3 Replies to “One Year to a Writing Life – May”