I am on a bit of a worldbuilding high right now. I’m getting some awesome feedback on my Erziyye map from a writer friend and geology geek, and basically all I want to do is work on the map right now. Sadly work, this cold and my slightly obsessive need for feedback from said friend on changes I make is making the progress a bit slow. But still, by this time next week, I’ll have stuff to show you for sure!

Today, though, I thought I’d show you what I’ve been working on when I worldbuild but my brain is at half-power: cleaning up map lines. As you know, I drew Erziyye by hand and then scanned it, which means the lines are a bit uneven. I’ve been going over it gradually to make them more even and a bit finer. It’s slow work, because my hand gets tired quickly handling a mouse like that, but I think the results are worth it. It really does look much cleaner. Here’s an example of an area before and after cleaning: 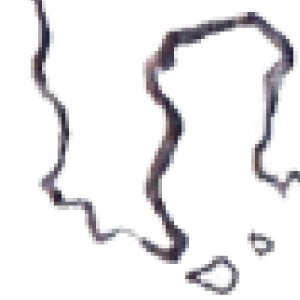 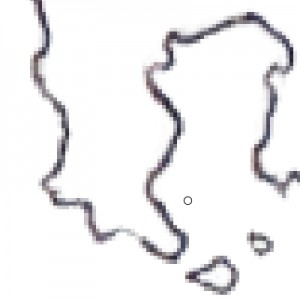 The first one is before, the second is after. Obviously this is a very zoomed-in shot. It doesn’t look like much but it really makes a difference. I’ll show you what I mean when it’s all done (one and a half continents to go!).

Not the most exciting update, but part of the process all the same. My Erziyye-time is getting a bit diluted right now on account of doing a bit of (much less detailed) building for my upcoming NaNo project. I’m trying to keep a balance though, and will definitely aim to keep a steady pace with the map. I’m looking forward to (and dreading!) getting to the coloring stage, but I do want to get the behind the scenes stuff (plate tectonics and so on) done first. Check in next week for some of that!