Today I’m bringing you one of those boosts that really don’t need my help in promoting it but that’s just so dang good I have to do it anyway.

On The Edge of Gone by Corinne Duyvis

On The Edge of Gone is not so much a post-apocalyptic YA novel as it is a inter-apocalyptic YA novel – the world as we know it is actively ending as the story progresses. A comet is about to hit Earth, and in Amsterdam autistic teenager Denise is trying to get her family to a shelter in time. When their original plan falls through, she quickly comes up with a new one – get onto a generation ship that’s about to leave the planet! Quite the premise, no? 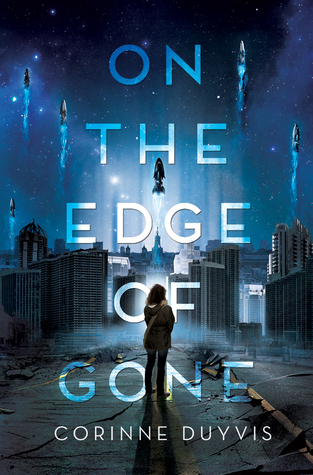 I had a vague memory of this book being the first book I read this year, but my Goodreads tells me this isn’t strictly true. I had read a couple of books for a University lit course and one short story collection before it. It was certainly my first big reading experience this year, though! I wasn’t sure quite what I expected going into it. I’d read good reviews but I also don’t read a lot of YA (or didn’t until this year, anyway) so I wasn’t sure how I would like it. And I gotta say – it pulled me in fast and it pulled me in deep! I remember sitting in my linguistics lectures desperately finishing just oooone more paragraph in the few seconds before the lecturer started speaking. Or, if I’m being honest, sometimes a few seconds after the lecturer had started speaking. And that’s saying something – I love linguistics.

This story has such a ride, both in terms of action and emotion. You really feel the time-crunch the characters are in every step of the way and even though it’s a somewhat long book it really flew by. I adored Denise as well, she’s such a well-written character! Everyone is, really, but Denise was my favorite (and main characters are far from always my favorites). And the end was just… perfect, to be honest. I so badly wanted to know what happened after the end, but at the same time it was the perfect place to leave off. A clear but open closing. Don’t get me wrong – I would devour a sequel. But I’m still glad there isn’t one.

Corinne Duyvis is a Dutch autistic, bisexual author and one of the co-founders of Disability in Kidlit (which you should totally check out!). She’s also written a Guardians of the Galaxy book for Marvel which is like… woah! Check out her stuff and follow her on Twitter @corinneduyvis, stat! And, of course, read On The Edge of Gone.