Last year for Adventboost, one of the things I was pondering boosting but couldn’t make my mind up about (mainly because at the time I was unsure of whether the creatives involved were characterizable as “marginalized” or not) is the rather entertaining YouTube series Carmilla (based, I believe, on a book of the same name). You should watch it, it’s fun! But that’s not what I’m boosting today. Today I’m boosting:

Couple-ish is a YouTube series about Dee, a Canadian non-binary artist, who ends up fake-dating their British roommate Rachel because Rachel wants to stay in Canada. Dee is played by Kaitlyn Alexander, a queer non-binary actor who also portrayed LaFontaine in Carmilla (who happens to be my favorite character on the show, hands down). I found out about Couple-ish via their Twitter and then did that thing where I watched episode after episode until there were no episodes left. Oops! 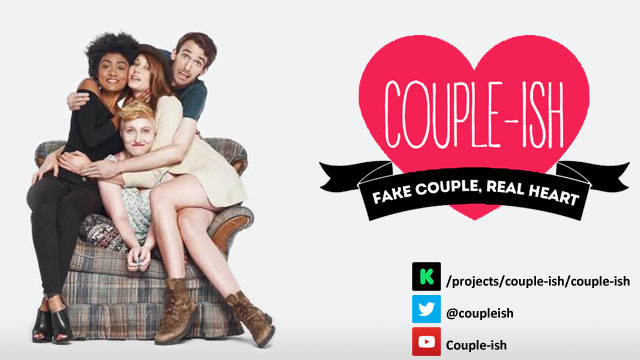 There are two seasons of the show, with 22 episodes each and I am currently a little behind because, well, I watched it when season 2 wasn’t all out but then sorta forgot to check for new episodes (it’s now firmly on my list of things to do when the term is over). It’s such a funny show! The writing is hilarious, and since it’s a relationship drama-comedy type of thing (and also featuring some competitiveness over who has the coolest couple-YT channel), obviously there’s a lot of drama and entanglements and crushes (requited and unrequited alike). And I’ll be honest: this show ranks high on the vicarious embarrassment scale from time to time. I have had to sit on my hands a time or two to keep from skipping past awkward moments. Here is a link to episode one:

I don’t want to give away too much of the plot, but it’s got some interesting twists and turns, and a lot of great and well fleshed-out characters. My fave is Cal, who appears on the scene in season 2. She’s super cool, but so are a lot of other people and both the actors and the writing is awesome. While Couple-ish is very funny, it does also feature heavier moments and topics. The topic of Dee being non-binary and what that means to them, as well as other people’s reactions, is also explored in a fair bit of depth which was both interesting and felt very fresh in terms of being a type of rep you rarely see.

One final thing that I absolutely love about this show is… the subtitles! The subtitles in this show aren’t just your average subtitles, showing what people are saying and tagging occasional sound effects. It also provides running commentary in the moments of silence and… it’s kinda snarky. In the best way. Like, you can feel the subtitles rolling their eyes a lot.

So yeah… go watch it, right now! It’s queer and cute and awkward, sweet at times and bitter at other times and generally just really worth your time, in my opinion. The episodes aren’t very long (roughly 3-10 minutes, maybe 6-7 minutes on average) making it eminently binge-friendly! So when you have a free afternoon, go ahead and queue it up. You won’t regret it.