Another #Adventboost, another webcomic. I’ll be honest: there’s probably gonna be a lot of webcomics in this boost series. This has been such a weird year, I feel like most my media consumption has been webcomics and RPG streams. Not much book-reading, to be honest. Anyway!

Today I want to tell you about Rock and Riot by Chelsey Furedi. Tripped over this one on Tapastic recently and wow. I mean, all I needed was this panel and I knew I had to keep reading: 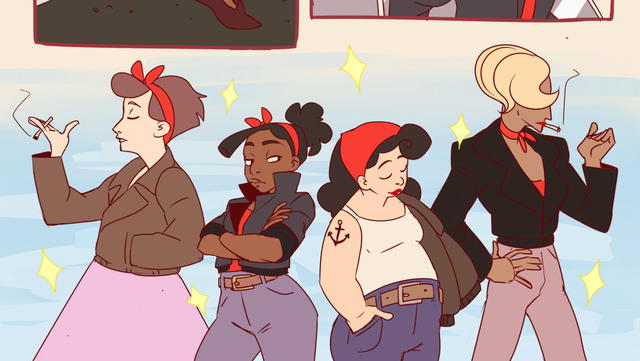 Like, seriously. How could I not keep reading after that?! Rock and Riot is an LGBTQ-themed comic about two rivaling teenage gangs in the 50s. It’s silly, but when I first started reading it my initial reaction was “omg, it’s Grease but without all the gender binary!”. At the same time, it’s not set in some alt-history version of the 50s where queer stuff is a-okay, but it manages to hold a good balance between historical plausibility, and wonderful queerness. And the art style is just so cute!

Another cool thing is that the first chapter is currently being turned into an animated episode, with voice actors and everything! That’s pretty freaking badass, if you ask me. Check out the promo over here! The comic’s website also features translations into several different languages which, as a language geek, I find pretty awesome! Might even do a Swedish version of it myself over my Christmas hols.

Rock and Riot  is created by Chelsey Furedi, a queer NZ comic artist studying animation. You can find her on Patreon and buy the first volumes of Rock and Riot on Storenvy.

Today’s Zero, Eight, Love post is about… a goat?