And so it is Christmas, everyone! Here in Sweden, we celebrate on Christmas Eve, which means I have spent today eating, drinking and being utterly spoiled by my family who have put me a good bit closer to my budgetary goals for going to New Zealand next year. In the inevitable post-Christmas-lunch lull when everyone (but me, who is always already done) sneaks off to wrap their last persents, I curled up on the sofa and finished reading Throne of the Crescent Moon by Saladin Ahmed. The book has been on my to-read list for quite a while and once I decided to do #AdventBoost I decided it was time to get to it. I ordered it from the library, then I kept being too busy to read it for a couple of weeks, and the other day i findally sat down and started on it and let me just say….oh… my… word. 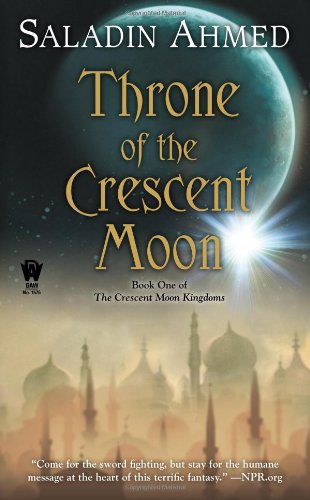 I was utterly, completely captivated from page 1. I don’t know what I was expecting exactly (other than it being good). I didn’t really read a lot about it beforehand, I just heard it was great and saw that it was listed in the “recommended reading” section in the Player’s Handbook for D&D 5e (plus I follow Saladin on Twitter, and he seems like an awesome dude), so I wanted to read it. I think that something about the title brought to mind a much more light-hearted, fast-paced adventure story and then I read the first page and… oh… my… word. It was not what I expected. It was so much better.

This is probably my favorite fantasy book I’ve read in years. Everything is good. The prose is beautiful, and evocative. The main characters are so well-drawn, naunced and realistic in such a way that you sympathize with them even when you disagree with them. The perspectives of the different POV characters are distinct in a very believable way, which draws you even further into the story. The story, of course, is also very compelling, very classical in some ways and quite unique in others. And then there’s the worldbuilding. The setting and cultures explored in the book (as well as the fantasy themes) are strongly inspired by Arab and Islamic culture in a way that makes my heart so happy. I’m (obviously) not Arab, but after 7 years of studying Arabic (and the MENA region to a more limited extent), I’ve developed a decent radar for “I want things to look Arabic but haven’t actually done research”-type worldbuilding. This is not that. Not even remotely. The worldbuilding is brilliant, and thought-out, right down to the way people speak. In a weird way I almost felt like I was reading in Arabic at times because of how similar it felt to things I’ve read in my studies (while at the same time also being very familiar from the perspective of having read a lot of Western fantasy). Another thing I thought was really cool was that there doesn’t actually seem to be a Europe-equivalent continent or country which is just such a welcome difference from so many fantasy world that is nothing but Europe-equivalents (sometimes bordered by stereotypical “Other” cultures).

Okay, this got a bit longer than I’d planned (and not quite as eloquent as I’d’ve liked) but I’m still sort of high on this book, to be honest. You really, really, really ought to read it. All of y’all.

Anyway, Saladin Ahmed is a writer and poet, who has been nominated for a bunch of prestigeous prices and won a Locus Award for Best First Novel (for this book). You can support him on Patreon, where he publishes patron-exclusive shorts monthly, and follow him on Twitter @saladinahmed. Next year, he’s going to be one of the Guests of Honor at Kontur 2017, SFF con that will take place in Uppsala and which I really look forward to attending.

That’s all for tonight, and that’s all for #Adventboost this year. Next year I will likely do it again, and plan it much better so I don’t have to run around like a headless chicken. Happy Christmas, everyone!