This has been a very productive week on a theoretical level, and a slightly less productive week on a practical level. I’ve made some “big choices” , as it were, about my current writing projects and it feels great to put some of my questions marks behind me. The biggest of the two choices was settling on a path to go down with my next release, the sequel of Going Home. I had been struggling a bit with how to structure it but I think I’ve solved that now. My solution involves expanding the story beyond the original scope. In the end I estimate about 60% of the story will be my original draft, so it’ll be quite a lot of extra work but in the end I think it’ll be worth it. I even made an outline of the “new” story today in Scrivener! I do love the cork-board feature. It’s so handy. Don’t look to closely if you want to avoid spoilers though! 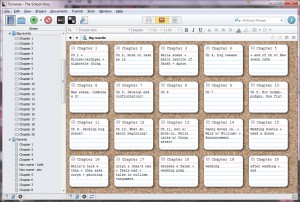 So, this week I have:

So yeah… more planing that writing this past week but still pretty good! Next week I will:

Right, I’m off to write a grocery list. It’s almost pay-day, after all!