A while back, I stumbled across A year of reading the world, a blog by a woman who challenged herself to read one book from each of the 195 UN-recognized sovereign states plus Taiwan (for a total of 196) in one year. I thought this sounded both like a fun project, and like a project that’s way too large for me at the moment. So I decided to make an effort to make little reading challenges for myself during those periods when I have a lot of time on my hands, for example when I’m on vacation. I have a few different ideas for what kind of challenges they’ll be: based on theme, genre, country, original language etc. However, the first one will be a little different: I’m going to read books that I have in my bookshelf but haven’t gotten around to reading yet.

As it happens, I will be off work for a grand total of 18 days this Christmas thanks to a very strategically places Christmas Eve, four vacations days and my flexible half-time schedule. Considering a fair few of those days (Christmas Eve, New Years Eve, the 20th when I’m going to a wedding etc) will be spent socializing I’ve decided that 15 books seems like a reasonable goal. Once I’d decided that, I took all my unread books out of my bookshelf to see how many there were. This was the result: 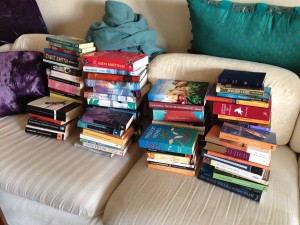 A bit more than 15, as you can see. I will have to do one or two more bookshelf challenges next year before I move on to the others, I think. Anyway, the one’s I ended up choosing for the challenge were (in no particular order):

Quite a mix of box, as you can see. I think it’s gonna be fun! Once I’m done and my holiday is over I’ll be posting about how the challenge went. Hmm… can it be the 20th now please?