It’s now been over a year since I started working with One Year to a Writing Life. With varying degrees of enthusiasm, I’ve worked through all 12 chapters so I thought it was time to summarize my general impressions of the book here. 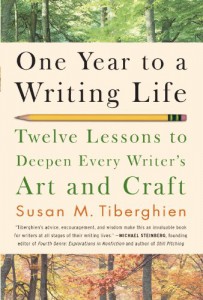 But first, I’ll talk briefly about the last chapter, called Writing the Way Home. I had trouble getting into this chapter. I’m not totally sure why. Maybe I was just too busy. The chapter consists of three simple writing exercises (a dream, a memory and a description) and then continues with some more complex ones that are designed to, I suppose, help you write your way home. Maybe the reason I couldn’t get into this chapter is because I’m not lost. I am home and, at least when it comes to writing, I’m mostly on top of things right now. I don’t feel like I’m seeking for anything in particular. Still, the two short exercises I did do, the dream and the memory (both 5 minute free writes), I thought I’d share. The dream was one from several years ago, which I remember in part because I wrote it down and in part because I found it interesting:

The snow cushions the world in a white blanket. Trees, fields, hills all glitter in the sunlight. The wolves have come after me out of the woods. Four or five, all grey and black. My sledge is fast though I cannot see what is pulling it, but the leader wolf is faster. Soon he is alongside the wagon. I hesitate, and then I jump. As I land on his back, my teeth bore into his neck and he collapses onto the ground. The fur tastes dark and damp, and soon it tastes of blood. A shake, a bite, another shake, and then he’s gone. The pack flees back into the woods.

The memory, on the other hand, is from when I was a kid, out in my family’s summer house. I’m not sure how old I was, maybe eleven or twelve.

She snuck down from the cottage to the tool shed. It was dusty and only vaguely organized, like all the other times when she’d been inside. Untying the knot on the backpack, a cylinder of cloth with no special pockets or zippers, just the shoulder straps and the thin rope that held it closed at the top, she stuffed a hammer inside and a handful of nails. They joined the matches and worn table cloth that was already there. She put the bag on as she left the shed and slunk around the corner of the house it belonged to, grandma’s house, so that she got to the side facing the field. That was the side with the newly built porch and, temporarily, the pile of discarded boards from the old, torn-down porch. She stuffed a couple of shorter ones in the bag, and grabbed a few, maybe three, under her arm before heading off into the woods. It was a hassle transporting them. The path was tough enough as it was. First down past uncle’s cottage unseen, then quickly past the giant ant hill where the piss-ants lived. Down the path a little ways and then into the woods were, at first, the pines stood high and close, the ground littered with needles that got into her sandals. She’d always imagined this was the part trolls lived in. Past the first army of trees, it got lighter again, the trees sparser but in return the ground grew jagged and uneven, a mess of rocks and hills and moss. This was the wood that she loved, her sandals scrambling over roots and blueberry shrubs as the boards dragged behind her. It wasn’t long, but it felt far, until she saw the tiny ravine, a little gash in the bedrock that, to her, seemed a valley. The tree, not thick but sturdy and long, lay all the way across it where it had fallen long ago, where she had found it the other day and decided that this would be her forest home. She just needed a shelter, and a place to start a fire, and she could come there whenever she wanted. She dropped the long pieces of wood and fished a smaller one from her pack, then the hammer and a few nails. Putting the plank at the top of the tree, she saw it was a good size. Small ones for a roof, and then long ones for slanted walls to keep the wind out. She smiled when she drove the first nail into the wood.

The scene was quite fun to write it, and I think I might use it somewhere in the future if I find a fitting place.

So, now that I’ve, somewhat, dealt with the last chapter, what did I think of the book in general? Well, overall I have found it a fun and helpful tool. I’ve enjoyed doing most of the exercises, and have gained a few ideas in the process too. When I bought the book, I read in the reviews that some people found it too “New Age-ish”. I can sort of see where they were coming from; some exercises do have a distinctly meditative quality. In general, that didn’t bother me. I understand that writing for a lot of people is a very deep, emotional process. That’s what it is for me, sometimes. Other times it’s just this fun thing I do to get ideas out of my head. Since I worked through this book one chapter per month, there were times when the “deeper”, if I can call them that, exercises coincided with me being in a headspace where couldn’t, or didn’t want to, get into the more meditative exercises and just wanted for fun. So at those times, I had a harder time completing them to satisfaction.

In spite of my mood sometimes clashing with a chapter, I think all the chapters had interesting exercises. That being said, I think it’s the more practical chapters (especially the one on dialogue and the one on editing, off the top of my head), that I’ll return to the most in future.

So do I recommend this book? Yes, I do, if you enjoy exercises that have a meditative, soul-searching-esque edge to them. If you don’t have the desire or patience to do those kinds of exercises, I think you might not get as much out of the book, like how I felt some months. Still, it’s been fun! And now it’ll be fun to move on to other books about writing. I bought a Story Bundle of writing books a while back and look forward to perusing those in the bunch that interested me. And of course, once I’ve read one I will be posting about it here. If you have any writing books that you can recommend, I’d love to hear about them in the comment section below!