I’ve been thinking for a while that I want to start doing more flash fiction and work more with writing prompts. I don’t do that a lot, but I find it to be a great way to get new ideas or develop ones that haven’t found their place yet. So, as of today, I will attempt to post a short piece, say 100-500 words, every Friday, most likely totally unrelated to any of my stories. These pieces will be inspired by:

Today, the Dixit card I pulled at random and the #CoffeehousePrompt from yesterday sort of worked together so I used both. The prompt was flower field and this was the card: 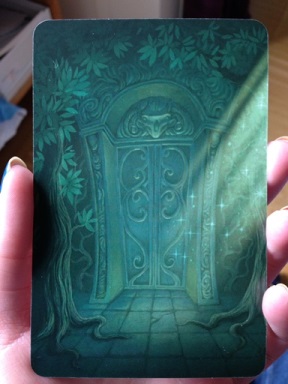 Beautiful, isn’t it? All credit for the image to the Dixit illustrators. I believe this one is from the Daydreams expansion pack, illustrated by Franck Dion. So what did I make with this prompt and this image. Well, this:

The grass tickled Mina’s chins as she meandered across the field. The basket that hung from the crock of her arm was half full with flowers, long, straight stems crowned with yellow, clear blue and deep violet. She couldn’t return to the keep until the basket was full, but she didn’t mind. The sun shone brightly overhead and the wind was still. It was warm, but not so warm that she would’ve preferred sitting in the shade. She was happy to take her time with the flowers, knowing the others would be too busy preparing for the feast to wonder what was keeping her.
Spotting a patch of tall, dark pink flowers, she headed towards them. Stopping, she put the basket down to inspect them more closely. She’d never seen flowers quite this color before, like the satin ribbons the Lord’s daughters wore. She smiled as her fingers skimmed over the downy petals. They would love these! Maybe they’d even let her have one of those sweets their father always bought them as a reward for finding the flowers.
She plucked the small knife from the basket, and began cutting off the stems close to the ground and placing them in the basket. She moved forward through the patch of flowers, cutting many but leaving enough that more would grow in the coming years. Working with her back bent and moving her basket along every few feet, her mind was now entirely on the sweets and the approval that would come with them. She didn’t look up until she felt a sudden chill. Standing up straight, she realized she’d stepped into the shadow of the keep. She was about to turn and walk back into the sun when her eyes caught sight of something… Puzzled, she stepped closer. Time and time again she’d played in this field, and she’d never before seen the door in the back wall of the keep. Yet there it was, small but magnificently ornate, with two trees growing on either side of it and a monstrous, gaunt head carved into the stone above it. A shudder came over her. She’d been in the field only a few days ago, and there hadn’t been a door there then. Torn between curiosity and fear, she hesitated where she stood. Then she heard it: a faint creak as the door began to open.

I thought the prompts went together quite well! I tend to be a bit obsessed with fitting different ideas together so it’s always a bit odd to write short, unconnected things like this. Still fun, though…

Have a good weekend, everyone!