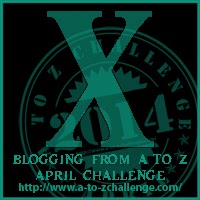 To be totally honest I don’t know that many words that begin with X, and the only one that really came to mind was: Xena! Xena (as in the warrior princess, not the dwarf planet currently known as Eris) was my first real TV crush and remains one of my major on-screen heartthrobs. I mean, she’s hot, she’s funny, she kicks ass… what’s there not to like? It was a bit of a confusing crush, though. Not because it made me consciously aware that I was bi (that wasn’t confusing at all), but because I could never quite decide if I wanted to be Xena, and therefor be tall, dark and awesome, or if I wanted to be Gabrielle, and therefor sleep next to tall, dark and awesome underneath the starry sky. Undecided as I was, I still taped every episode I saw and, because I had limited VHS tapes, went through a lot of trouble making sure not to tape the commercial breaks and deciding which episode to tape over when my tapes were all full.

Those episodes were eventually taped over with episodes of Charlie’s Angels (the original) and, later, ER, but my love for Xena lives to this day. Honestly, I sorta get the warm fuzzies whenever I watch an episode, even with the terrible CG.

Enough of my babbling now, have some funny Xena quotes:

Man, now I feel like watching my Season 1 DVD. And buying the DVD for the rest of the seasons… Actually, I still haven’t seen the later seasons of the show. Really must get around to that!